Journals (Start to Finish) Our tours, start to finish 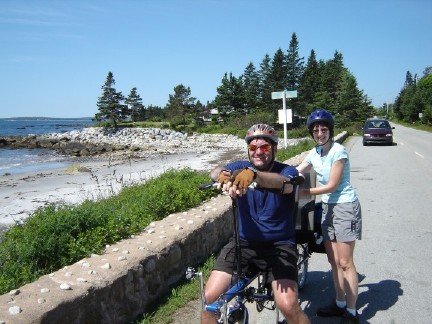 After some breakfast at the campsite we started back out on the Lighthouse Route. Going through rolling hills with views of the ocean between stretches of woods. Rode 25 miles into Liverpool and met Mom and Dad at the grocery store that was across the bridge in Brooklyn. We picked up stuff for sandwiches and breakfast supplies. We had lunch downtown at the local park. The bikers decided to try route 103 for a while (about 7 miles) instead of following the Lighthouse Route, it was pretty boring and very busy. At exit 17 we were glad to say good-bye to route 103 and rejoin, the Lighthouse Route, which we followed to Rissers Beach Provincial Park, which is, were we are camping tonight (right on the ocean!). They have built a beautiful (very long) boardwalk, which we enjoyed. It also has a very large beach. The water is cold, but I went in up to my shorts while Mary lazed around in the soft sand.

The bathrooms are primitive unless you go for a 3/4-mile hike to the other part of the campground. We have done a lot of riding the past two days. Riding these rolling hills take time away from sight seeing on foot. The weather has been as close to perfect, 70's to 80's, bright sunny skies, and 50's to 60's at night. This is not the Nova Scotia I remembered as a kid, at least not the weather! 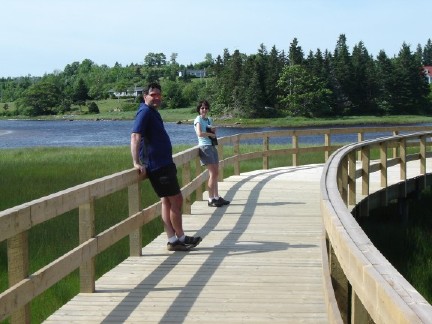 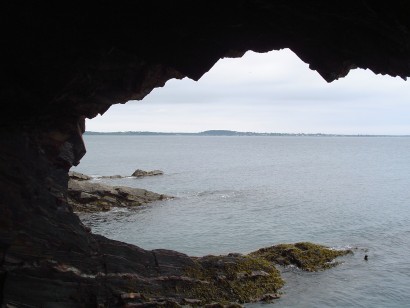 I woke up early and took a stroll down the beach at Rissers. It was overcast day today. We rode into La Have and spent time at the small museum/lighthouse there. La Have was the site of first capital of "New France". Then we caught the free ferry across the La Have River and rode to "The Ovens". The Ovens are natural tidal caves that were enlarged by gold miners about 150 years ago. The fact is that there really wasn't much gold taken from this area. We next rode into Lunenburg. Lunenburg is a crafts / shipbuilding community and I believe that clipper, The Blue Nose, (the ship on the back of the Canadian dime) was built there. The town of Lunenburg was also built on the side of a number of hills. If you're seeking a challenge, ride your bike (fully loaded) to the information building, which is located on the top of the largest hill. We walked the town for 2 plus hours meeting Mom and Dad for lunch on the harbor. It began to rain for the first time on this trip as we rode out of Lunenburg so we rode to Mahone Bay and found the "The Red Door" bed and breakfast. They took us in (soaking wet and all!). After settling in, we walked the downtown and shared a pitcher of red ale as we ate our burgers in the local pub. 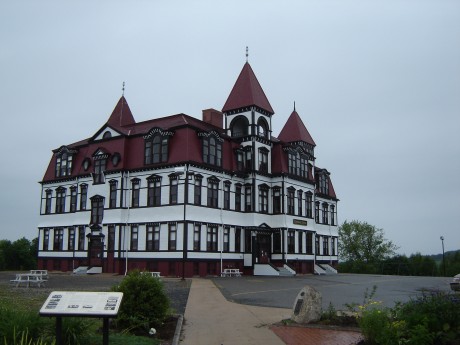 From: Mahone Bay
To: Dartmouth
Mileage: 60 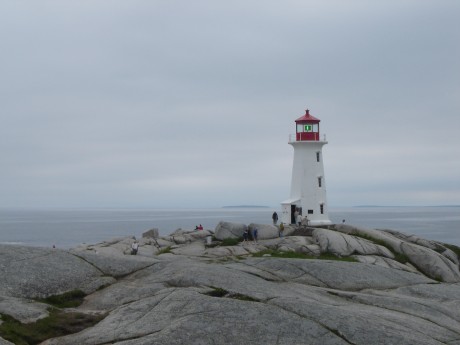 We were awakened by the smell of eggs and sausages cooking at The Red Door B and B. We all had an excellent night's sleep. Georges said that 7:30 came way too fast! Today, weather-wise, was almost perfect for a bike ride. We did encounter some strong headwinds from time to time, but for the most part it was overcast all day in the high 70's. After breakfast we began our journey to Peggy's Cove. Staying on the Lighthouse Route for 85 percent of the way. The car traffic got busier the closer we got to Halifax. The hills also got steeper. We did not ride very much side by side today. After riding through Chester, we stopped at the Hubbard's information center. There we met some young cyclist from CT, MA, and NH. They were fun to talk to. We also received news of the terrorist bombing in London, which saddened us. Whether you bike, hike, motorcycle, or travel by car; the Nova Scotia information centers are a great place to stop. Most have free Internet, lots of info, and bathrooms!!! We wish they would also have water, and have told them that bikers would really appreciate it!

We rode into Upper Tantallon and pulling in behind us was Mom and Dad. So we had lunch in the motor home, what a treat! We then headed for Peggy's Cove. Peggy's Cove is probably the most photographed area in Nova Scotia, the photo below and above should help you imagine the sights of the fishing villages that filled this part of the Lighthouse Route.

Just outside Peggy's Cove is a memorial to Swiss Air Flight 111 that crashed into the ocean just east of Nova Scotia. We stumbled across it quite by accident. Georges noticed a neat rock formation so we hiked up to it and just as we got to the top, the memorial was right there. The trail leading up to meomorial also had signs all over the place asking people to "stay on the path". . . .oh well. . . We spent (not enough time) about an hour at Peggy's cove. There is a lighthouse at the end with a post office inside.

We finished the Lighthouse Route at this point. We have no desire to ride into Halifax, and since we have Mom and Dad, we took advantage of them. We loaded the bikes on the back of the motor home and we thankfully drove through Halifax and Dartmouth, spending the night in a municipal campground in Dartmouth. 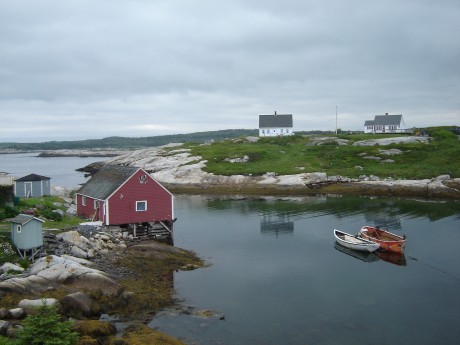 From: Dartmouth
To: Amherst Shore
Mileage: 0 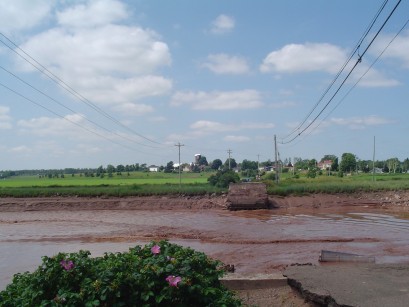 Traveling day - After cereal we packed up everything and headed into Truro for laundry and supplies. Spent the morning doing laundry and walking downtown Truro. Bought a new speedometer for SeeMore and a new helmet for the Rear Admiral. We then had lunch at the tidal bore. There are many tidal bores on the Bay of Fundy. In some areas on the bay, the tide rises and lowers as much as 50 feet. Tidal bores occur when the rising ocean water comes in and goes up the rivers. A wave (depending on location you can surf it) comes in and fills the riverbanks. It's not the most exciting thing to see in the world, but if you have time, I would recommend seeing one.

We then headed to Amherst Shore Provincial Park for the night to camp. We will begin on the Sunrise Trail tomorrow and then follow the Glooscap trail around the Bay of Fundy. 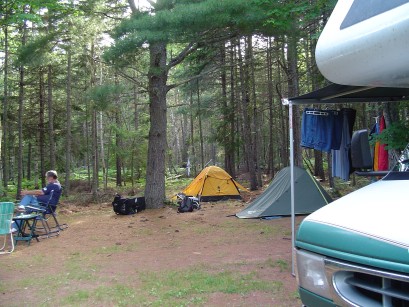 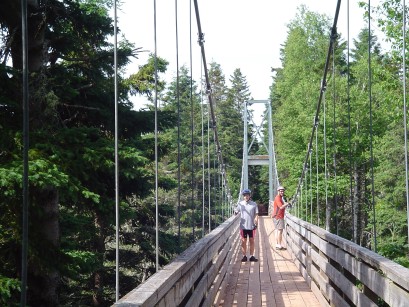 A near perfect day for riding! Sun/cloudy/a couple of rain drops (maybe enough to drown an ant) and in the high 70's. Start out on the Sunrise Trail and rode to Tidnish Bridge. This is the home of Ketchum's Folly. Ketchum persuaded the Canadian Government to build a railway that would transfer loaded boats from Tidnish to Fort Lawrence (Northumberland Strait to the Bay of Fundy) saving ships a dangerous five hundred mile trip around Nova Scotia. The project got 90% completed when the Canadian Government stopped funding it. Now all that is left is a wooded trail with some stone bridges. After walking the swing bridge that was there, we rode into Amherst where the Sunrise Trail turns into the Glooscap Trail. Amherst has old beautiful Victorian homes (on the west side) lining it's streets. We grabbed some subs to eat later and rode to River Hebert. As we rode across bridge into River Hebert a tidal bore occurred! We had lunch at the River Hebert Park, listening to live music. Next we stopped at Joggins Fossil Museum. This is a small museum, but the fossils taken from this small area are numerous. At the information center we were warned about the large hill outside Shulie, one girl said "I don't think I would walk up it", another said she doesn't like driving her car down it. It was large, but we have been up steeper on this trip. From Joggins to Cape Chignecto we left the Glooscap Trail and followed the Bay of Fundy Scenic Drive. It reminded us of parts of Alaska and the Yukon. You could see glimpses of the Bay of Fundy, but I'm not sure why they called it a scenic drive. It was void of traffic, which allowed for a lot of side by side riding. When we entered Cape Chignecto it was low tide and the fishing boats were lying on the mud. We arrived at a private campground to the smell of sauerkraut and pork, Mom was keeping us well fueled, we are eating like kings and queens! A long ride today, we are going to sleep well tonight. 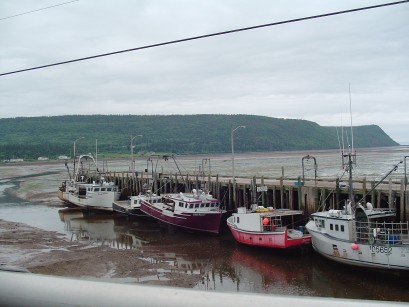 From: Cape Chignecto
To: Truro
Mileage: 44 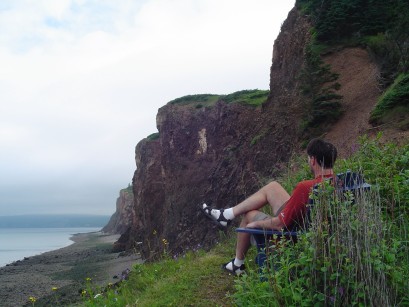 We decided to travel via motor home to see the Cape d'Or lighthouse. This would have been one heck of a ride by bike with a dirt road that went up up up and down down down. Then it was off to Parrsboro to the Geological Museum. The museum is brand new, and was worth the stop. After the museum we began the day's ride. At Parrsboro we picked up the Glooscap Trail again and the road was in very bad condition. The hills became numerous and we got SeeMore up to 44.6 mph! We had lunch/dinner at the Masstown Market (OH BOY!), what a treat! Tonight we are staying in the Best Western in Truro which IS NOT WORTH THE MONEY. We chose this hotel because we were going to use the Hot Tub, but it was a semi-warm tub, that seemed filled more with chlorine than water. We visited/walked Victoria park (recommended) and downtown Truro. Just one example of the friendly people of Nova Scotia: As we entered into Truro a gentleman pulled us over and asked us where in Truro we were staying. He then gave us a motor escort through town, stopping and waiting for us to catch up, right to our hotel. It's about 8:30 now, and I'm ready for lights out. 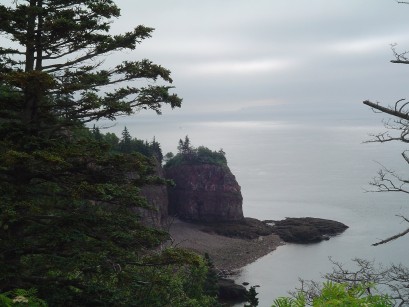 From: Truro
To: Brooklyn
Mileage: 81 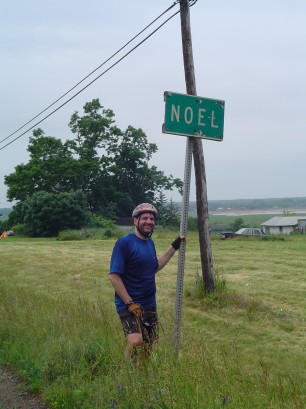 Had breakfast at the Best Western in Truro. I would again recommend finding other lodging, we got up to enjoy the continental breakfast but it was so poor that we had to go to the restaurant (bait and switch?) We left Truro via Wal-Mart were we loaded our pictures onto a CD for $3.97 Canadian. Mary also found a camera case that was missing the battery charger and bargained the manager down to a very fair price, for both sides.

Today, we continued to ride on the Glooscap Trail. This ride gave us great views of the Bay of Fundy and small family farms. There was very little traffic, but the road was in very bad shape. Georges' butt took a beating! We passed through Noel and took a photo of me under the town sign, then had some fig newtons by the Noel cemetery. Then we saw the Noel United Church across from the Noel town park.

We stopped in Walton to have lunch at the pub, then went out to visit the Walton Lighthouse.

Finished our ride at Smiley Provincial Park. Mom had fish stew waiting for us (double yummy). I've said it before, it's not about the riding, it's about the eating! Another day of great riding weather. It was mostly cloudy with the temperature in the low 80's today. 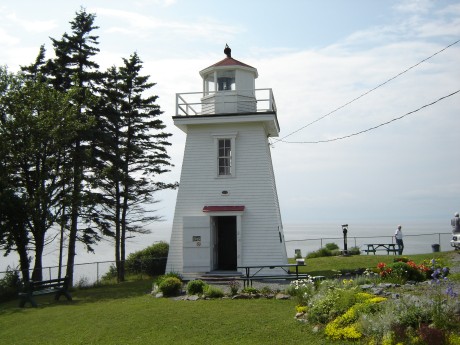