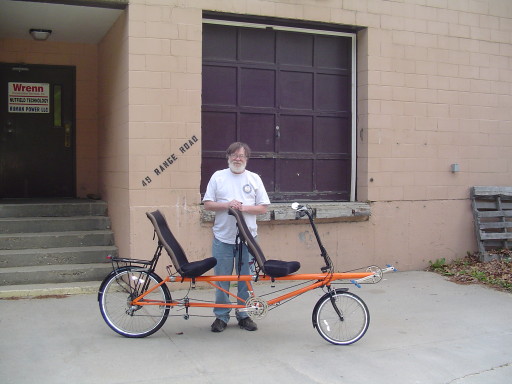 SeeMore spent this spring with Ted Wojcik who installed some S and S couplings so he could be taken apart when traveling. Now it is NO easy task keeping a 9 foot bike straight and true, will trying to divide and weld back together.... The operation did have some moments of concern, but Ted is a true craftsman. Now SeeMore is back, and beautiful! THANK YOU TED! 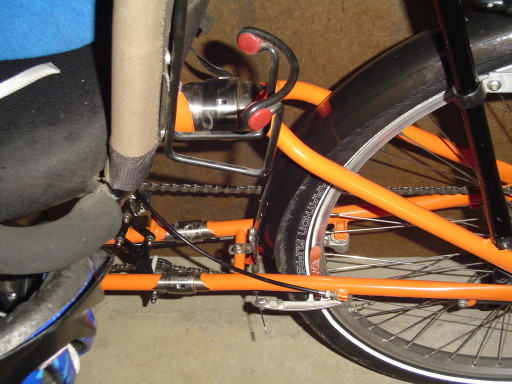 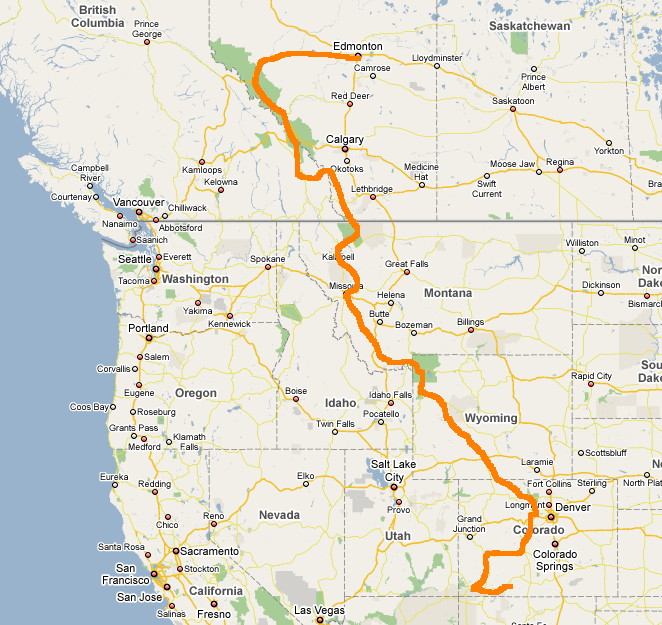 Starting to plan of our next cycling adventure with SeeMore. We are still in the planning stage, so this entry will be updated. We plan to start in Edmonton Alberta near the end of June. Here is what is in store:


The Canadian parks, with their wide road shoulders, provide excellent cycling conditions, though motorist traffic during the tourist season is heavy. Jasper, Alberta, a busy tourist center in the heart of Jasper National Park, is one of the five Canadian Parks the route traverses. Almost immediately after leaving town, we will be treated by scenery: glacial lakes, dramatic waterfalls, piercingly steep mountains covered with glaciers, and a tremendous variety of wildlife. Stops will be frequent just to marvel at the beauty. As we head south over several passes through the parks, we will take the time to go to Lake Louise and Banff. After 230 miles of amazing vistas, we'll leave Kootenay National Park and descend steeply into the town of Radium Hot Springs, stopping for an enjoyable soak in the soothing hot mineral pools. From Radium Hot Springs southward to Elko, the western side of the Rockies will find us following the Columbia and Kootenay river systems. At Elko, the route turns east over the Continental Divide through a series of small mining communities (Fernie and Sparwood which we visited in 2006). Then we will stay, again, in Waterton Lakes National Park. After the border crossing into the United States at Chief Mountain we will enter Glacier National Park in Montana, hopefully crossing the Divide back to the western side on the spectacular Going-to-the-Sun Highway. We missed Going-to-the-Sun Highway on our 2006 tour because of forest fires, so hopefully we will be successful this time. Then our route mainly follows river valleys bracketed by mountain ranges all the way into Missoula.

After Missoula, we will be cycling through the small Montana towns of Stevensville, Hamilon, Darby, Wisdom, Jackson, Dillion, Sheridan, Virginia City and Ennis. until we come to Yellowstone National Park.

After Yellowstone, we visit the Grand Tetons, then continue cycling towards Rawlings Wyoming. We will enter Colorado on Route 125, which will lead us to Walden Colorado, then Route 14; where we will find open grazing land and national forest lands heading into Kremmling. There is heavy summer tourist activity from Hot Sulpher Springs to Granby, the southern entrance to Rocky Mountain National Park. Next, Estes Park to Georgetown - this area is the playground for surrounding communities on the Front Range.


We also might try Mt. Evans Auto Road which is the highest paved road in the United States.


After Mt. Evans we will head towards Black Canyon of the Gunnison National Park. South of Fairplay, the route becomes more rural and traverses the high, open land of South Park. After crossing Trout Creek Pass, the route drops into the Arkansas River Valley near Buena Vista. The western slope of the Colorado Rocky Mountains is old mining country, from Salida all the way into Durango. Around Dolores, the mountains give way to the dry, open Four Corners region, highlighted by Mesa Verde National Park. Durango is the southern terminus of the historic Durango and Silverton Narrow Gauge Railroad, the only remaining regularly scheduled narrow-gauge passenger train.

.....then turn south down the west side of New Mexico and finishing in Mexico in search for that ultimate margarita.

Posted in North to South Tour | 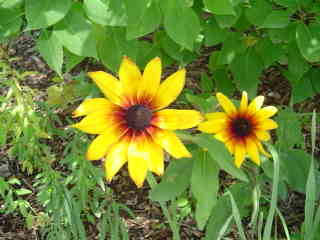 The Michigan has a jewel, in the Kal-Haven trail! The trail is a 33.5 mile trail with end points in Kalamazoo and South Haven, a Lake Michigan resort area.

This is the second time that I have ridden the trail, but the first time for the Rear Admiral. Before SeeMore and Clyde I rode a Schwinn hybrid single bike, named The Black Widow. She was aptly named because when I wasn't being a husband, father, and provider, I was with the Black Widow. So the last time I rode this gem, I was alone while the Rear Admiral watched the kids.

This is a beautiful trail. Much of it is wooded with abundant wildlife. There are picnic tables at some of the trail heads. And this trail even comes with a covered bridge! The trail is hard packed for easy cycling. In places you feel like your in a tunnel with the trees all around you and over head. There is a beautiful lake just west of Berlamont, and you pass many farms and fields. Again, if you are in the area, this is a must ride. The Kalamazoo trail head is on 10th Street north of Highway 43 just west of Kalamazoo. The South Haven trail head is on the Black River just off Highway A2.


Both photos were taken the day before when we visited the Frederik Meijer Gardens and Sculputres, a must stop when you visit Grand Rapids. 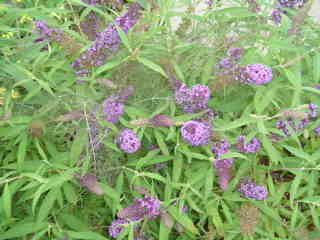 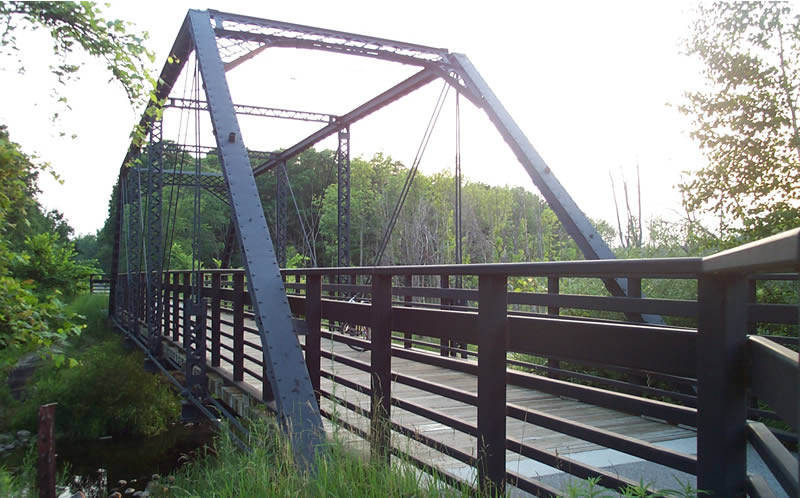 The Fred Meijer Heartland Trail is located in lovely, rural Montcalm and Gratiot Counties, in the heart of central Michigan. The trail winds its way north through farmland and wooded State Game areas, taking the traveler through the picturesque towns of Greenville, Sidney, Stanton, McBride, and Edmore. At Edmore, the trail turns east and leads through Cedar Lake and Vestaburg, entering Gratiot County where the trail goes through Riverdale and ends 2.5 miles east at Bliss Road. Along its length, it crosses several creeks and one river. Of particular interest, south of Stanton, is the 120-year-old historic bridge that spans Fish Creek.

The Heartland Trail (as it was known in the late 80?s) is paved for about 15 miles (starting near Greenville) and turns into packed dirt northeast of McBride. SeeMore tried to continue onto the non paved trail, but made it only a couple of miles because the trail was too soft. It was very quiet, and there was parking and some port-a-johns. It was a real pleasure to ride, and if you are in the area...we highly recommend enjoying it. The beginning of the trail (near Greenville) was a little hard to find, and there is limited parking. 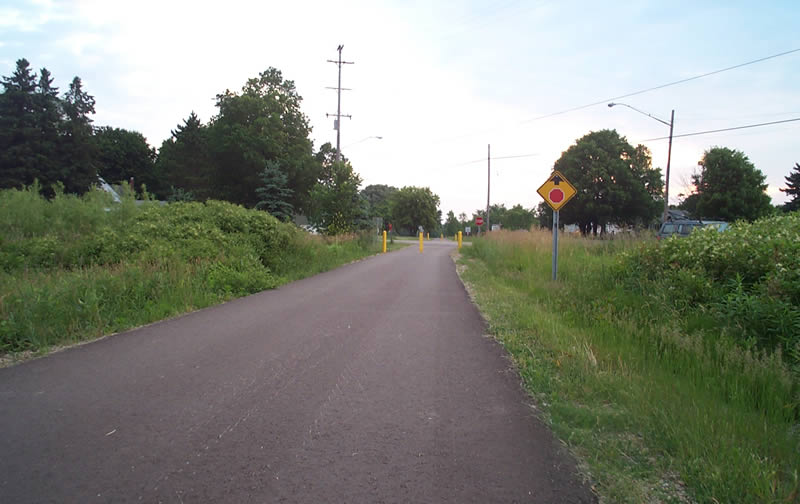 We've been asking numerous times, 'What is it like riding SeeMore'?

To date, we have only ridden two recumbents and both of them are tandems. I had fantasies about those single seat recumbents. In bike stores, I have been know to sit atop in a dreamlike state for a few moments when the rear admiral is cruising the clothing section. However, I soon come back to reality. I remember the days before Clyde (our first tandem), when riding with the Rear Admiral was not as delightful. Our strengths and riding style were handicapping our enjoyment. A great part of the fun of bike riding, for us, is doing it together.

Most of you reading this are sitting with your backs against a comfortable chair. If you stop reading and look around, your vision is about 300 degrees in every direction. Seating on SeeMore is the same. We refer to it as sitting in an easy chair. We love Clyde as much as any cyclist loves their faithful companion, but SeeMore is just plain more comfortable. I can see so much more, which in turn, has slowed my pace down.

Even if we couldn't see more, we travel slower on SeeMore than Clyde in two out of three areas. You are either climbing, descending or on flat terrain. Since you can't stand while attacking a climb, you speed is naturally going to suffer. While climbing, our lower back pushes against the lower part of the back of our seats. We can travel at a slower speed without feeling like we are tipping over. On the flats, we are also a tad bit slower. SeeMore's aerodynamics is countered by his weight. Our speed riding the flats in about 1/2 mile per hour slower then when we ride Clyde. We can cruise comfortably and steadily at 15 to 16 mph (non touring) on SeeMore. The teams on Tour de France have nothing to worry about.

Down hill is a different story. SeeMore is a RANS Screamer, and he lives up to this title. First, you have to be safe. The Rear Admiral needs to be comfortable, and feel secure. After all, I need her energy to help drive us up the next climb. SeeMore is very steady when sailing down an incline. Our center of balance, coupled with the smoothness of the Schwalbe Tires, make screaming down hills enjoyable (at least for me!). We have safety reached speeds of over 45 mph, and could have easily gone faster.

Steering and turning are different also. SeeMore needs very little steering. It is very important that your hands rest gently on the handlebars. You can over steer SeeMore, which is a big mistake. Just remember that HE is in control, and you are all set. Most of our steering is by shifting our weight. If you hit a groove, do not steer out of it! It's best to let SeeMore handle it. It takes a full size two lane American road to reverse direction. When reversing direction, you need to watch your heals of your feet, as they may hit the front tire. Since we reverse direction very little, you don't get to practice this move, hence we are not very smooth.

We hope this gives you just a little insight on the ride.

The Rear Admiral and myself are NOT gear heads. We had people ask us for SeeMore's Specs, so:

This year's adventure sent the Rear Admiral and SeeMore to Michigan. Because of commitments, we were unable to bicycle the Upper Peninsula. Another time will have to be planned. We did get to spend time with Noel's Mom and Dad, so it was a GRAND time in Grand Rapids. We even rode on a couple of bicycle paths...in between museums and site seeing.